Also find me on: 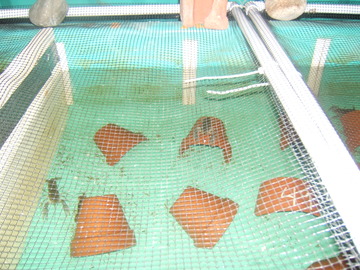 I studied the behavior of crayfish in Burt Lake, Michigan, through the Research Education for Undergraduates program at the University of Michigan Biological Station.

The invasive crayfish Orconectes rusticus has displaced local species O. virilis and O. propinquus in northern Wisconsin, and Illinois freshwater ecosystems. Currently, Burt Lake, Michigan is in a transition state with all three species coexisting in unknown abundances. Relative ability to avoid predation contributes to species displacement and the prevalent escape strategy employed by crayfish is the tail-flip. Tail-flip strength was evaluated in the lab using a horizontally suspended spring scale to measure exerted force of harnessed crayfish. We used O. rusticus and O. virilis in our tail-flip trials, 9-12 of each species were recorded. We found virtually no variation between species when comparing average tail-flip force. Considering these findings, other mechanisms must be considered in explaining the superior predator evasion of O. rusticus such as out-competing for shelter space and displaying more cryptic behavior in the presence of fish and crayfish congeners. When comparing crayfish intraspecifically with tail-flip trials, it was found that female O. virilis have significantly stronger tail-flip force than their male counterparts. Morphologically, female crayfish have wider abdominal segments, which might be contributing to the noted difference between the sexes. Possible behavioral implications for female O. virilis having stronger tail-flips than males include the ability of females to choose mates, population ratios being skewed by males being preyed upon more heavily than females, and female advantage in accessing resources utilizing tail-flips for foraging. These proposed morphological and behavioral correlations with increased O. virilis female tail-flip strength have yet to be determined.

View this project's sporeprint
A sporeprint shows projects that are similar in genetic makeup. e.g. Made with similar technologies